Another tool in the box: Creation of a molecular “dimmer switch” advances gene editing

A new system has been developed that allows researchers to fine-tune gene expression with oral drugs, work that provides a powerful tool for gene editing.

A team of scientists recently created an innovative genetic system where a drug taken by mouth could be used to control the action of a gene editor, like those used in CRISPR systems. This has useful applications for research studies in cells and animals, and perhaps most importantly, could lead to improvements in the safety and accuracy of future gene therapies in humans. The technology can be applied broadly for studying genes and diseases, and was developed by researchers with HD expertise, incorporating a drug that is relevant to HD. Though actual clinical trials are a long way off, the company that has recently licensed the technology has an existing interest in HD.

Improving the control of gene therapy

Although the methods for delivery of gene therapies have improved vastly in recent years, it hasn’t yet been possible to control the actions of those therapies once they reach their targets in the brain or other parts of the body. Ideally, when modifying human genetics, we’d want to be able to fine-tune things like the location of the genetic change, the amount of change that occurs at once, and the ability to stop the change in surrounding cells if it proves harmful – those last two have proved to be a particular challenge in gene editing, until now.

A recently developed genetic switch system, dubbed Xon, addresses some of these challenges in a novel way. It was created by a team of scientists led by Beverly Davidson at the Children’s Hospital of Philadelphia, joined by researchers at the pharmaceutical company Novartis. The idea behind Xon was to create a gene editing technology that could be precisely delivered and then controlled over time using a drug that acts like an on/off switch.

How does it work?

Imagine a red traffic light that is on all the time, and can only be disabled with a special tool. There’s no way to move forward until the red light turns off. With the Xon system, scientists can put a stoplight in front of any gene, by inserting the gene and the stoplight together into a genetic package and delivering it to cells in a dish or in a living animal. The new gene is present but inactive, meaning it can’t produce messages or proteins, until the stoplight is removed. But when a particular drug reaches the cell, it acts as the tool that turns off the genetic stoplight, activating the gene.

The reason that this is an exciting scientific innovation is that the Xon system allows researchers to insert a gene and turn it on and off by simply adding a drug to a dish of growing cells, or by giving the drug to a research animal. This could be a new way to understand what happens when there is too much or too little of a given gene or protein, or to create a disease model to easily explore genetic interventions at different time points during aging.

In a recent publication in the journal Nature, Davidson’s team tested the technology using a variety of genes involved in neurodegenerative diseases and cancers to show that their levels could be controlled based on when and how much of the stoplight-disabler drug was given.

Even more interesting is the potential application of the Xon system to technologies like CRISPR and the future of gene editing as a therapeutic. This recent paper demonstrates the ability of the Xon system to be combined with CRISPR-Cas9 technology, for more precise control of CRISPR editing using a drug fed to mice. Davidson’s team demonstrated this using an artificial gene that can make a mouse’s liver cells glow green. But ultimately the hope is that it could be applied to human therapies.

A system that can help us gain better control of CRISPR gene editing is an exciting prospect because it provides more hope of safely adapting this technology for future medicines. This is not currently possible for most diseases, because direct, irreversible changes to human DNA can have drastic consequences. We wrote recently about the first ever successful safety trial of a CRISPR drug for a human disease that commonly affects the liver. Although it would be marvelous in theory to cut out or correct the HD gene in people, the knife-like CRISPR system almost always leads to additional unwanted changes in other genes. This is why we’ve so often emphasized that gene editing needs to come a long way before we can apply it to the treatment of human brain cells, which can’t be regenerated like cells in the liver.

“Coupling Xon with a CRISPR-Cas9 system that targets a disease gene (like the HD gene) would mean that an oral drug could turn the gene editor on and off. ”

Coupling Xon with a CRISPR-Cas9 system that targets a disease gene (like the HD gene) would mean that an oral drug could turn the gene editor on and off. The dose could also be adjusted to control the amount of gene editing – not just acting as a tool to disable the red stoplight, but also acting as a “dimmer switch” for precise regulation. Most importantly for safety, if anything went awry, the treatment could be stopped to prevent further changes to their DNA. Right now this is all theoretical, because the Xon system and other gene editing “dimmer switches” are in early developmental stages. Nevertheless, this publication hints at the possibility of applying it to therapies in people, and Novartis has licensed the Xon technology.

So why has this innovation made HD research news?

First and foremost, we know that HD is caused by a change to a single gene, so it has always been a prime candidate for genetic therapies, and dozens of researchers and companies worldwide are developing innovative solutions to treat HD at its source. HDBuzz (and HD researchers) always have an eye out for new technologies that improve upon existing methods. Furthermore, the leaders of the team that published the recent Nature paper are respected HD researchers who have devoted much of their careers to the development of gene therapies.

However, the main reason this publication has popped up as news for the HD community is that the Xon system actually relies on an existing drug to flip the gene editing switch – and that drug is none other than branaplam. Yep, branaplam, the oral drug developed to treat children with SMA, which Novartis will soon be testing in clinical trials for adults with Huntington’s disease.

This does not mean that Xon gene editing has any part in upcoming trials for HD. It simply means that branaplam, a drug with genetic cut-and-paste abilities, forms part of an elegant new system that can be adjusted to control the activity of any gene scientists want to study. “Dimmer switch” systems for gene editing could potentially be designed to use a completely different drug, but in these early experiments, Xon and its precise control with branaplam has stood up to many tests of flexibility and accuracy.

The Xon system is a really cool early-stage technology, and though it’s not ready to be applied to human treatments, it is a novel element of the gene editing toolbox. Furthermore, it was created by researchers with HD expertise, and has now been licensed by a major pharmaceutical company which is already invested in HD therapeutics. That bodes well for its continued development in the study and potential treatment of HD and related genetic disorders.

Leora Fox works for the Huntington's Disease Society of America, which has relationships and nondisclosure agreements with pharmaceutical companies, including Novartis. For more information about our disclosure policy see our FAQ...

Does blood hold the key to testing treatments earlier in HD patients? 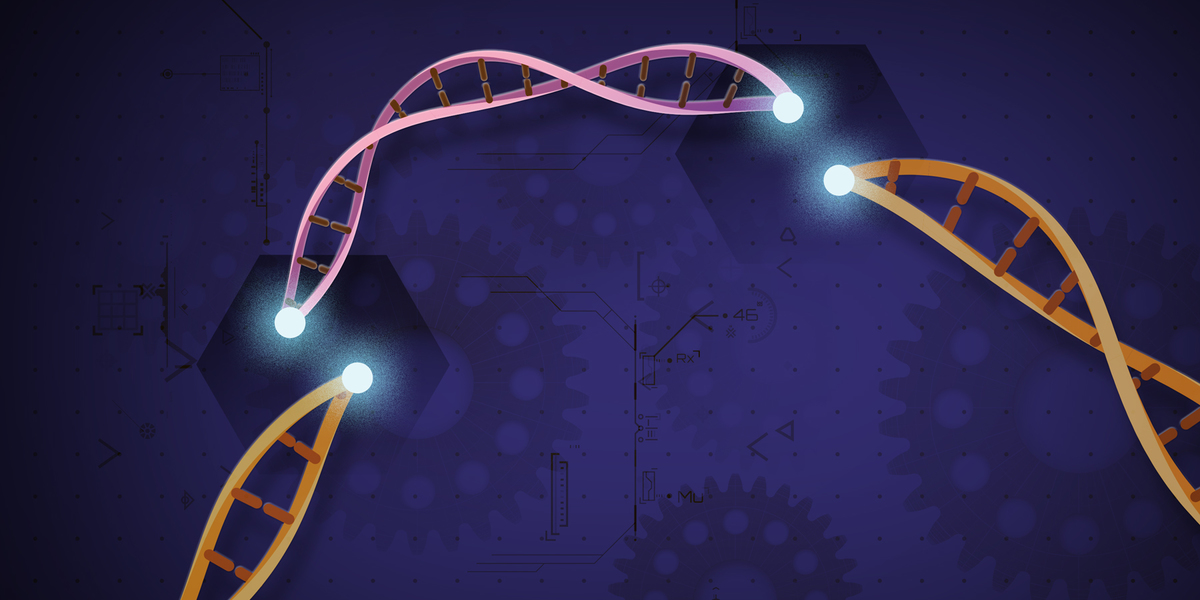 Caution urged for the use of gene-editing technology CRISPR